On Wednesday, December 16, 2019, Maryland Crime Victims’ Resource Center, Inc. (MCVRC), on behalf of a crime victim representative whose daughter was killed by a felon fleeing from the police who crashed into her daughter’s vehicle on the Baltimore Washington Parkway on June 24, 2019, after the defendant side swiped a marked police cruiser.  The victim’s representative requested and received from the Federal District Court in Maryland at Greenbelt a $10,337 restitution award at sentencing.  The defendant, Darnell Basset, who pled guilty to involuntary manslaughter was sentenced to 51 months of imprisonment to be followed by 3 years of supervised release, by United States District Judge George Hazel, despite recommendations for a higher sentence from the Office of the United States Attorney, the court’s presentence report, and the victim representative’s counsel.  At the time of the offense, the defendant, who had two prior felony convictions, was on court supervised release, having been released from imprisonment 10 weeks earlier.  Currency in the amount of $550 that was seized from the defendant at the time of his arrest was ordered released to the victim.

MCVRC attorney Victor Stone represented the victim’s representative at this Maryland sentencing in Federal Court, who, like her deceased daughter, lived out of state.

MCVRC is a statewide non-profit organization whose mission is to ensure that the rights of victims of crime are fully implemented and that crime victims are treated with dignity and compassion.  MCVRC (www.mdcrimevictims.org/help) offers free legal representation, grief counseling, and other assistance.  MCVRC can be reached, toll free, at 1-877-VICTIM-1. 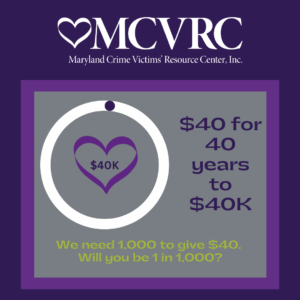